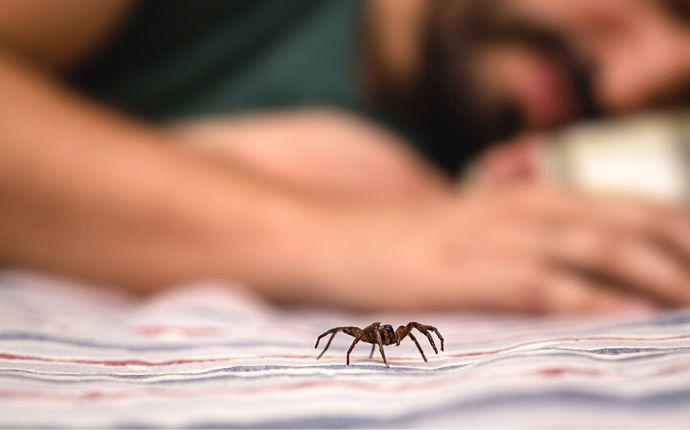 Spiders are common in nature and may occasionally pop up in our homes. Even if they only make an occasional appearance, seeing one is a nightmare if you are afraid of them!

Arachnophobia is the fear of spiders, which many people experience. While most spiders are harmless, it can be frightening to worry about whether the spider is venomous.

Jumping spiders can be intimidating, but they don’t pose much danger. They generally aren’t strong enough to bite through human skin. Wolf spiders are only dangerous spiders if you’re allergic to their venom.

Each of these is venomous and will bite when threatened.

The severity of the reaction to the venom varies on your age and size. Spider bites are more concerning for children and pets, but for adults, spider bites can still pose a health risk.

Familiarizing yourself with poisonous spiders can help you to avoid spider bites.

Black Widow spiders are known for the red hourglass marking on the underside of their shiny, black body. While females can get up to two inches long, males will usually only get up to one inch long.

Females are protective of their eggs and bite if they feel threatened.

Black widows make their webs close to the ground due to their feeding habits. They are known for their messy webs, also referred to as drunken webs.

Black widows prefer warmer regions, but they live all over the United States.

Brown recluse spiders tend to hide. They aren’t likely to be out and about during the day because they are nocturnal. These spiders hide in dark places when they live in houses.

Brown recluses range in color from brown to almost white.

The violin-shaped marking on its head may help identify a brown recluse. However, other spiders have similar markings and not all brown recluse spiders have the marking. Their marking is not the best way to identify them. Use their eyes instead.

A brown recluse has only six legs, while most spiders have eight.

Brown recluses live in southern states and the midwest. They are unlikely to be seen in Maryland, but that doesn’t mean the chance is zero.

Hobo spiders live in the northwestern states. They are uncommon in Maryland, but they can stow away and end up in states outside of the zone they inhabit.

They are defensive biters and prefer to flee before biting.

Hobo spiders prefer to live close to the ground in dark places like cracks and holes because they aren’t good climbers. Their webs are funnel-shaped and make for secure hiding places.

While they may seem aggressive, they don’t attack humans out of boredom. Hobo spiders have poor eyesight and sometimes may not even be able to see you.

Hobo Spiders are brown and have stripes on their abdomen. Their head is fuzzy and bulky, similar to wolf spiders.

Spiders are common in basements because they are dark, damp, and often have other insects living in them. Be careful when you’re in a basement to avoid potential spider hiding spots.

These spiders don’t seek out humans and will only bite when they feel threatened, which you can do unknowingly. If a venomous spider bites you, you may experience the following symptoms:

If a spider bites you, seek immediate medical attention. Kill the spider and bring it with you in a container for identification purposes.

Spiders tend to look alike. It is easy to confuse common house spiders and venomous spiders. If you are concerned about whether spiders in your home are dangerous, you can contact local pest control experts. These experts can check for infestations and identify them.

Phenom Pest Control can help keep your family and home safe and pest-free all year round!