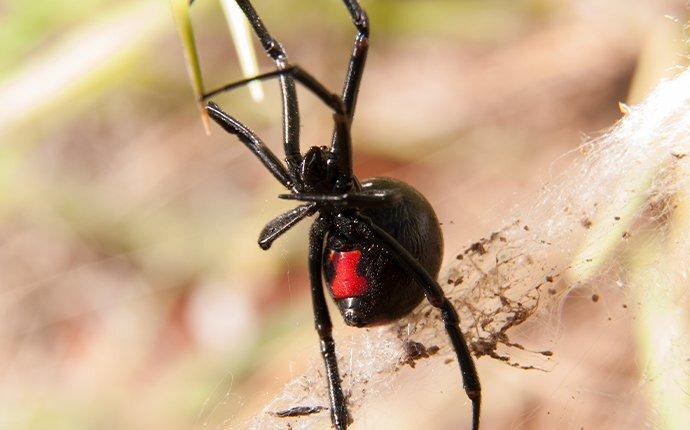 The truth is that most spiders in Baltimore, Maryland aren’t dangerous to people, but the black widow is one of few exceptions. While all spiders have venom and fangs, most don’t have venom that’s potent enough to harm us. But, a black widow spider bite can lead to serious medical problems.

While you probably have an overall idea of what black widow spiders look like, there’s still a couple of important details to keep in mind. While they can be identified by their pitch-black coloring, it’s actually only the females of the species that have the iconic red, hourglass marking. Males of the species sometimes have other markings such as a stripe or spots, but both the male and female have bulbous bodies and black coloring.

Where Will You Find Black Widow Spiders?

When outdoors, black widow spiders are commonly found in woodpiles, under stones and decks, or in tree stumps. They prefer cluttered, dark areas and will often get into buildings like sheds and garages. When outside, they will look for out-of-the-way places such as basements and crawl spaces.

What Should You Do If You’re Bitten?

Luckily, black widow spider bites are quite rare. Despite what many people have heard, most spiders, including black widow spiders, aren’t aggressive. They will only bite if they feel threatened, and they don’t go out of their way to hunt people down and attack them.

However, black widow spider bites can be dangerous and often lead to nausea, muscle cramps, trouble breathing, tremors, headaches, and more. If you suspect you’ve been bitten by a black widow spider, it’s important to get medical help right away before symptoms worsen.

How Can You Get Rid Of Black Widow Spiders?

If you’ve noticed any black widow spiders around your home or business, the easiest and safest way to remove these dangerous pests is to contact Phenom Pest Protection.

We provide residential and commercial pest control services that will prevent spiders and their pest prey from getting inside, and we can also remove any current infestations, no matter how severe.

While the easiest way to control spiders is with professional assistance, it’s still a good idea to take a few steps on your own to make your property less appealing to these pests. By following these tips, you can reduce the likelihood of a black widow spider infestation: