Home Blog  The Most Common Types of Wasps in Maryland

The Most Common Types of Wasps in Maryland 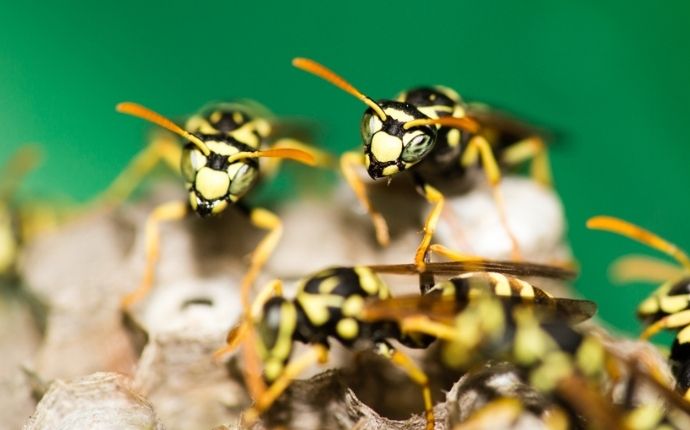 For most people, the sight of a nearby wasp will send them running. Their stings can be extremely painful and cause serious reactions for some people. But did you know that not all wasps are aggressive?

There are thousands of species of wasps worldwide, each displaying different behavior patterns. Below, we’ll go over the most common types of wasps in Maryland, how to identify them, and what you should do if you or a loved one gets stung by one.

Most Common Types of Wasps

Here are the most common types of wasps you’ll encounter in Maryland.

Bald-faced hornets are black and white yellowjackets that measure around ¾ of an inch long at full maturity.

These hornets build the gray, ball-shaped nests typical of hornets. While protective of their nest, they don’t usually attack humans who stay a safe distance away. Bald-faced hornet nests build their nests anywhere from ground level to over 60 feet high.

Bald-faced hornets are more beneficial than other types of wasps because they eat other pests that can wreak havoc on flowers and vegetable gardens.

A mature bald-faced hornet colony consists of a queen and up to 700 workers. This is one of the largest types of hornet colonies.

Around two inches long, cicada killers feature black and pale yellow stripes. They are one of the larger varieties of wasp in Maryland.

Cicada killers construct their nests in soil, often lawns or soft dirt. Multiple nests can become a nuisance because of the holes they create. Although they aren’t usually aggressive, male cicada killers can become territorial around their nest. Fortunately, the males can’t sting.

While they mostly feed on flowering plants, cicada killers get their name by paralyzing cicadas to bring back to their nest. Cicada killers lay their eggs in the bodies of cicadas, which become the primary food source for their larvae.

They are solitary wasps. A mature nest consists of only one mature female and a few mature males, along with one or two larvae.

European hornets are not naturally aggressive but tend to sting when they feel you are threatening their nest. They build paper-like nests in hollowed areas, including the walls of a house.

They feed on various insects, like butterflies, yellowjackets, and bees. They can also feed on tree sap, which can harm vegetation if it becomes excessive.

These are social wasps, meaning their nests are quite large. They consist of around 200-400 workers and one queen and their brood of larvae.

Paper wasps are slow flyers, so they build paper nests in any protected area they can find. They die after a hard frost, after which you can safely remove the nest.

They feed on a variety of insects, including caterpillars and spiders.

Since their nests are somewhat fragile, paper wasps live in smaller colonies of around 100 adults.

This type of wasp builds its nests with mud and is not aggressive in most cases. Unless you provoke them, they will not sting you. People often find mud dauber nests stuck to walls or on the sides of equipment.

Female mud daubers specialize in hunting different types of prey. While these may include caterpillars and spiders, they prefer to feed their brood paralyzed spiders.

Mud daubers are solitary wasps, with females constructing a small nest to feed several brood cells. It is uncommon to find a large mud dauber nest.

Yellowjackets have bold black and yellow stripes and a body that measures up to ⅝ of an inch long. They are probably the most recognizable type of wasp in Maryland.

Yellowjackets are very aggressive and can sting multiple times. They nest in various locations, including walls, doorways, and hollow trees.

They eat different types of insects and can be beneficial for a vegetable or flower garden. They also like sweet things and will target human foods such as sugar and meat.

At the peak of their reproduction cycle in late summer/early fall, a mature yellow jacket colony can consist of thousands of workers and larvae.

What Dangers Do Wasps Pose?

The primary danger wasps pose to humans is their painful sting. While most only sting when they feel threatened, they sometimes consider the mere presence of humans as a threat. As a result, they charge in and attack and sting as many times as they can. If you are stung on the face or throat, you should seek medical attention to ensure the sting doesn’t affect your ability to breathe.

Some people are allergic to wasp stings. If you are as well, you may experience an allergic reaction that can worsen with multiple stings. Those with a severe wasp allergy might even go into anaphylactic shock after a sting which is a potentially deadly allergic reaction.

There are a few things you can do to keep wasps away from your home. Keep the following in mind if you start to see more wasps around your property:

Wasp Control and Prevention in Maryland

If you encounter any wasps on your property, the best thing you can do is call a licensed pest control expert. Since wasps can be aggressive and dangerous, this is a job best left in experienced hands.