Home Blog  Cicada Killer Wasps: Are They a Danger to Baltimore Homeowners?

Cicada Killer Wasps: Are They a Danger to Baltimore Homeowners? 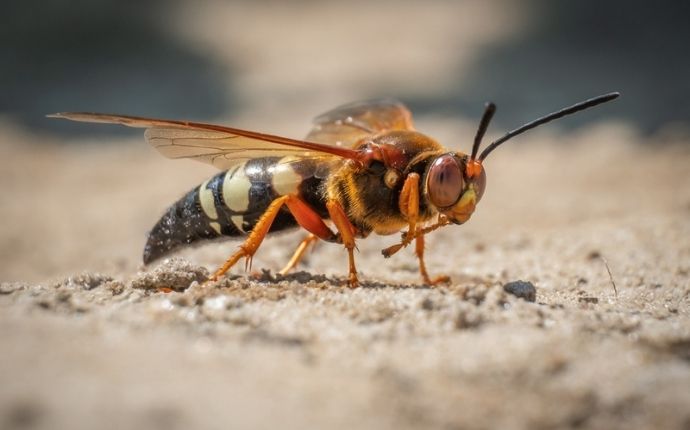 The name “cicada killer wasp” can sound very scary, but are they as dangerous as their name suggests? Are cicada killer wasps in Baltimore a serious concern? These large wasps are not uncommon in the eastern United States, but they don’t pose much of a threat to humans. Because of their size, these insects look very intimidating, and since they burrow in the ground, an unsuspecting person or animal can step on their nests which can be a frightening experience.

Below, we’ll explore everything you need to know about cicada killer wasps and what to do if you find them on your property.

All You Need to Know About Cicada Killer Wasps

Cicada killer wasps do not live in colonies, unlike hornets and bees. Instead, female cicada killers dig burrows about a foot deep in bare ground or grass. These pests eat adult cicada killers that are hunted by the female wasps. Females usually sting their prey and then drag it into their burrow. As long as food remains plentiful and conditions are favorable, cicada killers will burrow in the same place, which can wreak havoc on your lawn.

Cicada killer wasps are one to two inches long, making them the largest wasps found in North America. These black wasps have dark yellow or orange stripes and brown-tinted wings. This unique color sets them apart from other pests. Cicada killer wasps have 6 legs and large jaws. They also have hairs on the middle part of the body.

When and Where Can They Be Seen?

In the US, these wasps are most commonly found east of the Rocky Mountains, in the east and the Midwest. In Baltimore in particular, you will see more cicada killers during the early summer months.

These wasps prefer light-textured and well-drained soil that is near plants or trees that have cicadas. The females usually dig into your flower bed, garden, driveway, or sidewalk. Cicada killer wasps usually make very bothersome buzzing sounds, which can help you locate them.

To make their burrows, female cicadas push out the soil using their head and front legs. These burrows contain oval chambers at the end that are big enough to accommodate cicadas.

Cicada killer eggs hatch in just two or three days, and the larvae will feed on the body of a cicada for two weeks, then spin a cocoon of silk with soil and sand. The cocoon will stay in the chamber throughout the winter and emerge in the summer. Only these wasps emerge in the spring, as adults do not live through the winter.

Are Cicada Killer Wasps in Baltimore a Danger for Homeowners?

Although their names suggest otherwise, cicada killer wasps in Baltimore do not pose a serious threat to humans. Although the female cicada killers can sting, they are not known to be aggressive and typically only sting when directly provoked. The males can be more territorial but lack a stinger.

The biggest threat they pose is to your property, especially when the cicada population has intensified. When left uncontrolled, cicada killers will dig tunnels in your area, and the activity below the ground can undermine your patios and decks and can cause your plants to die.

If they are left uncontrolled in large numbers, it will be harder to revive your damaged and unhealthy lawn.

It is always a good idea to consult an experienced home pest control service and pest control professional before attempting to remove any cicada killer wasps from your property. Our expert team can handle any type of pest, from cicada killer wasps to rodents, termites, cockroaches, and many more. Contact us today for a free quote and to schedule your pest inspection.